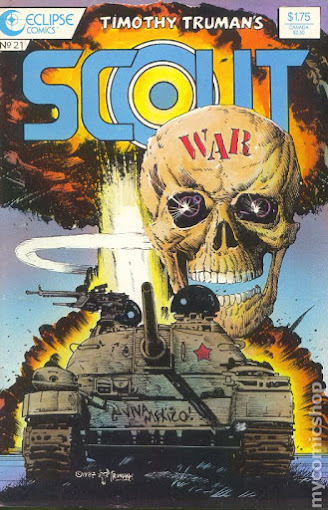 The final five issues of the original series. From what I gather it wasn’t canceled from low sales, but the author felt he could take the character as far as he could at that time. In the final issue, Scout walks away. For some time, the character had been war- weary, a person who never wanted to be a warrior or soldier in the first place. It was immediately followed up by two 4-issue mini-series, Swords of Texas and New America where minor characters come to the forefront. Then later succeeded by Scout: War Shaman which picks up with the main character fifteen years later.

As it stands, these are the best issues of the entire series. Gripping and raw, the stakes have never been higher and that tension ripples through the pages and illustrations. Though I do have to say that Scout seems to become an observer in his own comic. Everyone else is running about with big plans and he’s just swept up in the tide. No wonder the author chose to tuck him away. From the beginning he had no real ambition beyond living wild in the Apache hills of his ancestors. 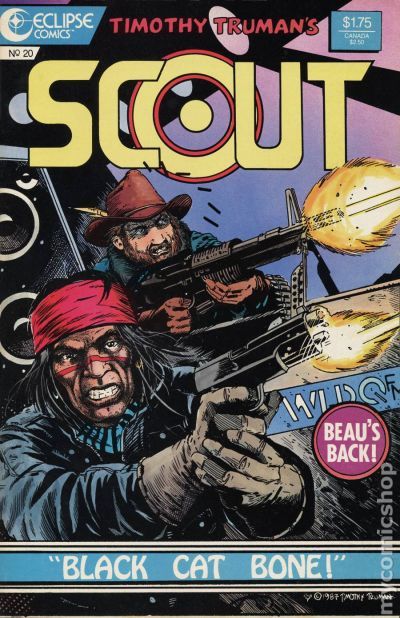 Issue 20: “Black Cat Bone”: Monday and Scout hook up with the Swords of Texas and a US Senator who has caught wind that something nasty was hatching from the top of the U.S. government. The side-story deals with recurring character Lt. Rose Winter who is sent by the President’s office to secure the nuclear warhead. These stories collide as the Swords of Texas and crew find the warhead about to ship off with the people who shot up the mercenaries. Violence breaks out and the warhead is accidentally dropped onto Las Vegas.

Issue 21: “I’m on Fire” With the aftermath of the bomb, Scout and his allies move south and begin a propaganda campaign against the current administration. While the country is really being ruled by Vice President Lowery, the president becomes suspicious of his activities. Rose Winter and her troops catch up with Scout.

Issue 22: “The Wolf is At Your Door” This begins the final three issue arc of the series. Scout, Monday, The Swords of Texas are squared off against the communist Mexican forces invading Texas. Meanwhile, Lt. Rose Winter defies her orders to pull back and allow the insurgent forces free reign. The Vice President then murders the President, attempting to make it look like an accidental overdose, and seizes control, but the act is recorded by Mossad agents.

Issue 23: “Cryin’ at Daybreak” The invasion continues on for a week. Many are killed on both sides. Then the United States Army appears and orders everyone fighting the invasion to lay down arms and surrender. The rebels choose a third option and essentially the rag-tag team declare civil war on the government. Israeli troop arrive to help the Scout and friends, but then discover that their own country was invaded after they left. This leaves us to the final showdown and the confrontation with whoever is pulling strings in the shadow.

Issue 24: “Sittin’ on Top of the World”. The skirmish along the Mexican border has caused a domino effect across the world, culminating in what seems World War III has broken out. Monday has a plan to end the conflict and blasts off into space to take command of a Russian Nuclear Defense Platform. 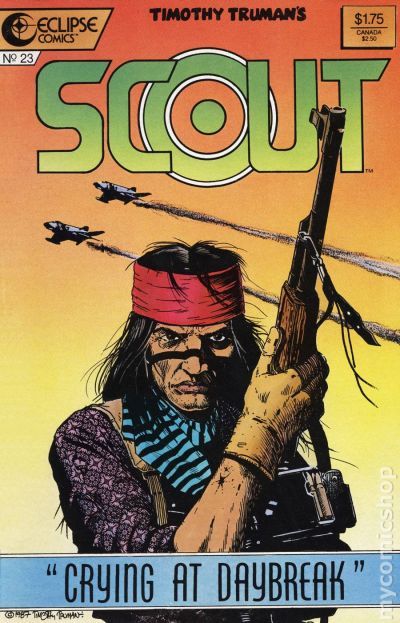