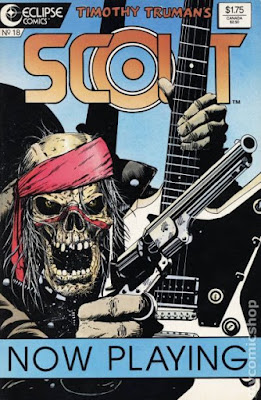 As the rest of the series has never been collected into trade paperback format, I bought all the rest of the issues off of Mile High Comics, My Comic Shop, and eBay, and I got them for a fairly reasonably price with sufficient shuffling about. There were a few sellers with ridiculous asking prices, but the most I paid for any individual issue was $4 (issue 16- the 3D issue) , most circled around the two dollar range.

As I stated in the previous entry on this series, Scout takes a little bit of time to find itself and these next seven issues I believe it does that. Gone is the overt supernatural elements of the series, replacing them is more unnerving, covert mysticism, where the reader finds the line between divine inspiration and insanity a thin line. There’s enough political drama in the world of Scout without needing to add much more to it.

Starting with issue 15, featurettes become common in the series, where a mini-story is added to look at the perspective of another character in the same universe. Their stories will eventually merge with the greater arc of the world of Scout. 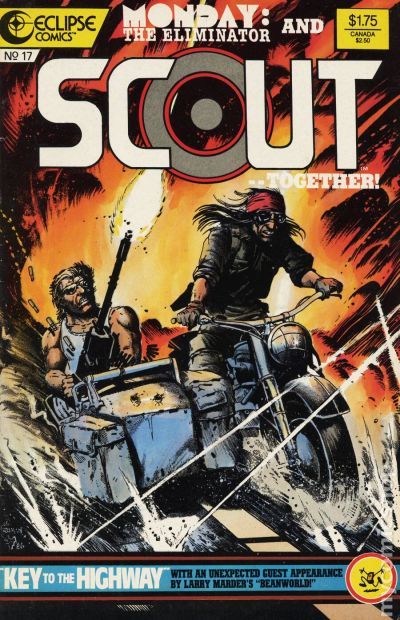 Issue 15: “Uncle Sam Blues”: In the last issue, Scout was taken prisoner by the U.S. military. Rather than imprison him, the chuck him into a veterans asylum for his P.T.S.D and drug him up. He goes through another mystical experience, naturally, before summoning up the strength to break out. But he is stopped by another mystical warrior imprisoned in the hospital, a mass-murderer called Monday the Eliminator. The side-story deals with the mercenary group Swords of Texas, who are tricked into smuggling an important crate of McGuffins to a terrorist organization and then are double crossed.

Issue 16: “Stormy Monday”: This was a 3-D issue which was a minor fad in comics back in the late 1980s. It passed quickly though, leading to the bankruptcy of one publisher Blackthorne. In this issue, Scout and Monday have a protracted fight scene (needed to justify the 3-D costs I guess) before teaming up and breaking out of prison. Honestly this is only issue of Scout where virtually nothing happens.

Issue 17: “Key to the Highway”. The art really improves in this issue. You can see, smell, taste, and touch the talent as the artist finally blooms into his own. Monday and Scout spend months being tracked by government forces as they take a circular route to meet Scout’s uncle at the ancient Apache hills. He goes on a mystic quest once again and fights his personal demon, with the help of some weird beings from Beanworld - another comic from Eclipse about minimalist beans- making just about one of the weirdest crossovers ever. The backup feature deals with Missy and her band, survivors of the Houston massacre, are strong-armed by local thugs in Las Vegas.

Issue 18: “Blues Hit Big Town”. Scout and Monday hit Las Vegas and become wrapped up in Missy and her band’s legal trouble. Which nearly leads to violent confrontation and a glimpse at the future of the series. The backup feature deals with Monday meeting several underground connections in the city. We learn more of his boring “mysterious” past. He doesn’t need to sleep. He’s also some, apparently, immortal warrior who travels from conflict zone to conflict zone. Not much else is revealed. A pretty standard “mysterious” past for an 80s character. Luckily the rest of the issues don’t waste any time on it. 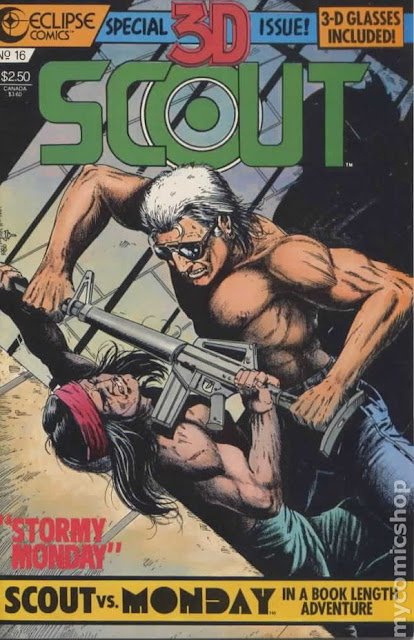 Issue 19: “Houserockers”: This issue carries another gimmick, briefly popular in the 1980s, the floppy square 48 record attached inside. This was mostly done in books, I remember Bloom County: Billy and the Boingers had one attached - there must have been others. They were cheap, easy to produce, so why not. The used issue I bought still had it attached. Recorded by the Dixie Pistols, a band fronted by Scout creator Tim Truman, gives us two songs: Double Moon Stomp and Blues Crusade. I won’t comment on the quality as I haven't listened to them, but below I included a video of Truman doing a karaoke version of Blues Crusade.

The rest of the issue deals with Missy and her band struggling against the local gangsters and trying to win a battle of the bands. While Monday picks up information that a nuclear warhead has been stolen - the mysterious package from issue 15 - while the Communist Mexican army begins moving north. Issue 19 is easily the weakest of the series. All these important events are revving up and yet we focus on a stupid battle of the bands.