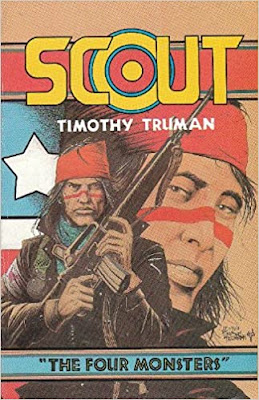 Since no good new comics are being produced, I keep stretching further and further into the past. And here’s a ripe oldie from the second golden age of comics - the 1980s - Scout a comic put out by Eclipse Comics - my favorite of the indie publishers at that time. Alas, it has fallen to obscurity. The first published Alan Moore’s Miracleman in America, adapted a whole bunch of Clive Barker stories into beautifully painted comics, and created my particularly favorite comic, Destroyer Duck. Enough about them, let’s look the first collection of Scout, The Four Monsters.

Scout is set in the dystopian future of 1999 - our old future- where, in a similar vein to Solyent Green, the problems inflicted on modern American society are due to over-fishing and exhaustion of the soil from overproduction. Most of the rest of the world seems to be under the grip of a Soviet Pact and have leveled trade embargoes on the United States and allied countries, forcing us to fend for ourselves. Into this the four monsters of Apache legend have snuck into power - presumably guided by other forces not revealed in the first book.  Mass upheavals followed, with many losing their land, unemployment skyrocketing, defunding of police, and force conscription of the young into the armed forces. 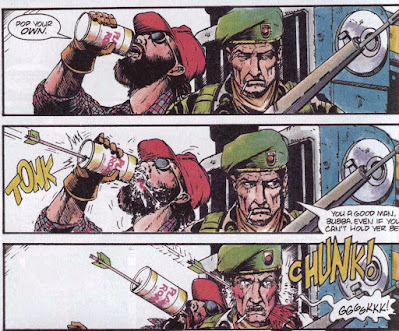 This leads to our hero, Emmanuel Satana aka Scout, a former drafted soldier who has gone AWOL to retreat into his Apache roots. While on a peyote bender, he is contacted by a spirit guide named Gahn, who first appears as cricket, then as a squirrel. He directs Scout to take on these four monsters which have seized control of the country and to destroy them. The last being none other than the president of the United States. Thus begins a violent road.

This volume collects the first seven issues of the comic (a more recent reprint by Dynamite Comics has the 1 - 8), and you can see the nascent artist coming out. The art isn’t the greatest, yet you can see the talent just about to bloom into full maturity. Some of the story pacing, some of the dialogue could be improved, but you can easily see the talent behind it. And judging from issue 7 - drawn by Tom Yeats- it is just on the cusp of becoming itself. Remember, the weakest story in the Sandman series was the first one, then it became something amazing. I have a feeling it will here as well. 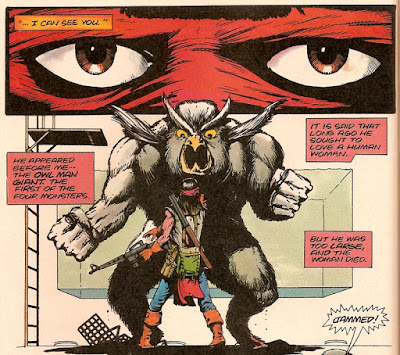