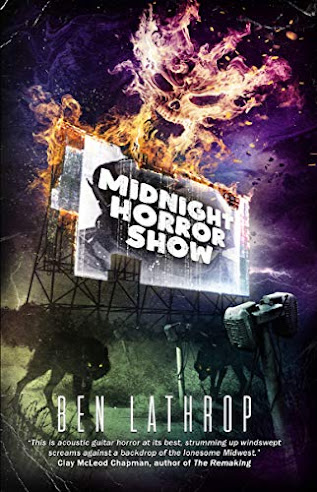 “You know why people don’t talk about those rods anymore? Why nobody shows up in one of my jobs at the cruise-ins or the county auto show? Because they’re all gone. Not one of ‘em lasted more than a year. They didn’t fail, now. They all ran just like they was supposed to, but every last goddamn one of those cars put somebody in the ground. They were killers. And I’m the one who turned ‘em loose.”

An ode to the nearly lost tradition of the Midnight Creature Feature and their macabre hosts. If you fondly remember Elvira, the Svengoolie, Vampira, Dr. Creep, Sinister Seymour, or Grampa Al Lewis you will absolutely love this sinister adaptation of the late night monster movie scene. The debut novel of this author, Midnight Horror Show takes place in the 1980s when the horror host was on its last legs, with a few flashbacks to the 1960s when they were at the height of popularity.

The actions of the last late-night horror host in the small town of Dubois come back to haunt the present day. A series of savage murders rocks the town. The local sheriff is stumped as the evidence begins to point to revenge by a dead man and a pair of satanic sisters who died nearly twenty years earlier. Many twists and turns occur and just when you things are wrapped up in a nice tight bow, and other criminal complication springs up to throw the theories out of whack. All of it ends with an October surprise and a Halloween event no one in Debois will ever forget.